I’ve written a couple of times about Sebastian Thrun, and not always in complimentary fashion. In the first piece from 2012 I could be accused of calling him a ‘knucklehead’. The second in 2013 was more a tracking of his change of heart and mind, from messianic mission to hard-headed business. I would like to mention my caption of the pic of him, though (given the quote you’ll read below if you stick around), as I claimed that Thrun “resembles an evil genius from a James Bond movie” (OK, I’ll grant you it’s a pretty obvious resemblance).

I’ve yet to call him an ‘oily charlatan’, but then again I’ve not yet seen the documentary film Ivory Tower, now released in the US (probably won’t make it here – too parochial). Here’s the trailer:

William Deresiewicz has seen the movie, and the derogatory term is one he gleefully applies in the following paragraph from his review, The Miseducation of America:

Thrun’s motives are not difficult to discern. An oily charlatan who looks and sounds like a Bond villain, he wants to make a lot of money. Udacity, like Coursera and others, is a for-profit enterprise. All that business about bringing the world’s educational resources to children in Outer Mongolia is nothing more than a loss leader. At the news conference announcing Udacity’s deal to offer for-credit courses at San Jose State—the key initial step in monetizing the MOOCs—he looks like he just swallowed a canary. He also refuses to answer the first question: “How’s Udacity being paid, and how much?” 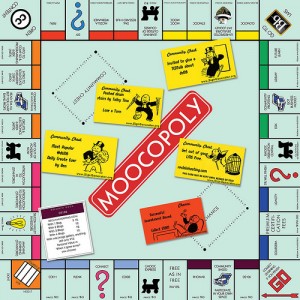 So MOOCs are getting muddy, though their stuttering march is yet to be abated. Their seemingly simplistic form of higher education is strongly debated, as it should be, and the pattern that will emerge is not clear. The bigger picture is important, as MOOCs can be viewed as a minor player in the solid march of open education in its broadest terms, encompassing not just how, who, where and when we educate but also includes how we research and who gets to read the outcomes of that research (open access and more).

The message is not just to keep an eye on MOOCs. If you’re a keen Googler, vary the search topic and try alternatives such as open education, open learning and OER. If you’re keenly following the progress of OER, take a look at Ishan Abeywardena’s latest blog post. There’s continuing interest in OER in Asia, not just the conference Ishan mentions, but also recent work published by COL and CEMCA (Commonwealth Educational Media Centre for Asia), including an online course on the very topic!