If you’re a follower of Tony Bates (as I obviously am, given the link on the right), you’ll have noticed his recent post ‘Time to retire from online learning?‘ No, he isn’t disappearing completely from the blogosphere, but is stopping most of his professional activities (consultancies, guest speaker spots, conferences, etc.). The reason? Check for yourself.

So, given his immense stature in the field, and my history of fleeting interactions with him over the past decades, I thought I’d post some personal thanks to Tony. First and foremost, I believe that Tony Bates is one of the rare persons who are expert in both educational technology and pedagogy (or andragogy, or teaching and learning, whatever you want to call it). And part of our difficulty is that we don’t recognise how exceedingly scarce such expertise is. There are first rate educational technologists, and a good number of skilled educationalists (don’t like that word much, but it’ll do here), but Tony is pretty-well unmatched in both. Added to this are his skills as a communicator, in person and in his voluminous writings.

I don’t just like his stuff, I still use it, such as in a workshop activity which gets participants to analyse a new or emerging technologies using Tony’s ACTIONS model. It’s great for getting discussions going. 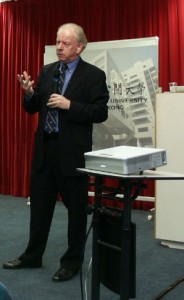 He’s an exemplary teacher, both face-to-face and online. I haven’t been his student, but one of my staff in Hong Kong was in his Masters programme at UBC, and certainly expressed the highest levels of satisfaction with his interaction with Tony (if you’re reading this Tony, he’s gone on to great things!).

I’d first heard of Tony when he was at the UKOU in the 1980s, and suspected that he was a good bloke (partly as his writing was so solid and sensible). This was confirmed by a friend and colleague of mine at Hong Kong Polytechnic, Tammy Lai, who went to Milton Keynes to attend one of Tony’s workshops. Upon arriving at the accommodation, Tammy was appreciative of the nice man who helped her with her case up the stairs. It wasn’t until the workshop started that she learned to her surprise that her humble helper was none other than the esteemed Professor Bates.

I can’t remember when I first met Tony in person – most likely at a conference, either ICDE or ASPESA (now ODLAA). 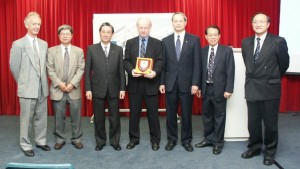 What I am sure of is that he was a visitor to and staunch supporter of the Open University of Hong Kong, where I worked between 1993 and 1998, and from 2001 to 2005.  Respected by staff at all levels, Tony’s presentations were engaging and challenging, and he was (is!) not averse to stating positions that may not be fully aligned with his host’s actions. No, he would not tell others what to do or how to do their job, but would challenge comfortable positions and perceptions with his wit and wisdom.

Now I’m not sure if it was deliberate, but he timed his visits well, and made space for well-earned R&R amid his busy (nay, frantic) schedule. 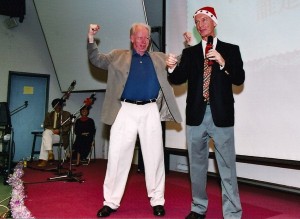 Tony even managed a visit one December that coincided with the annual OUHK Xmas Party, where he joined in the festivities with gusto. His sense of fun can be illustrated with an explanation of the pic at the right. We ran a concert which included a quiz. At the end, as there were three people with winning scores, the ‘tie-breaker’ question was to guess the weight of the honourable guest (Professor Tony Bates). Not known for his reluctance, Tony joined in with alacrity and enthusiasm (no, I won’t tell you his weight).

Tony does find time to relax (if you read his site you’ll know this already – golf, flying, skiing, etc.), and I have the photographic evidence to prove it. 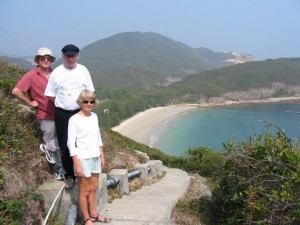 I’ll bet you’re surprised this is in Hong Kong!

During one of his visits, he joined us on a friend’s junk trip to Hong Kong’s outer islands, where one partakes of all kinds of fresh seafood washed down with appropriate beverages. A post-lunch walk is usually required, and the pic shows Tony with my wife Marilyn and friend Chris admiring the stunning view.

So, thank you Tony Bates for your immense contribution to the field. You have helped me to improve as an educator. May your semi-retirement be enjoyable, prosperous and fruitful.