There are five guitars in our house, though two belong to my son; a black Gibson Les Paul and a Peavey bass (also black). For me, the pick of them is an acoustic purchased in about 1969 to replace my dismal first guitar. 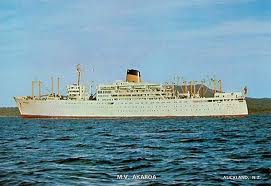 It was sitting beckoningly in the window of a second-hand shop in Hobart, and from memory cost about $40 (a princely sum for me at the time).

The hard case attracted me almost as much as the guitar itself – it bore the stickers from the sea voyage of the previous owner, including the name of the ship by which it made its way to Australia, the Shaw Savill Line’s M.V. Akaroa. Its owner, surname Hansen, had travelled to Sydney (from where?) in Cabin 351 on Deck D.

The guitar is pretty, with rich colouring, and almost flamenco in shape. 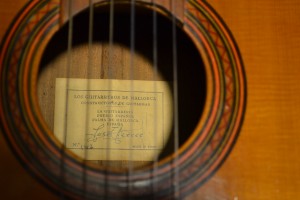 As you can see if you look closely at the pic, it was made by José Ferrer in Majorca (‘Los Guitarreros de Mallorca, Constructores de Guitarras; La Guitarreria, Pueblo Espanol, Palma de Mallorca, Espana; José Ferrer, No. 1312’). And that was the clue which recently led me on a voyage of discovery to find something about its origin, thanks to the powers of the internet.

The search was fruitful. First, the maker: “José  Ferrer (Granada, b. 1926-d. 1976) José Ferrer, the son of Eduardo Ferrer, was born in Granada in 1926. From the time he was a child, he was surrounded by guitar making– and cut his teeth in his father’s workshop. During the war and post war, he was forced to work at other things– business was bad. Few Spaniards had money, and a guitar was the last thing that would have occurred to them to spend what little they had. This being the case, José decided to move to Barcelona and make professional castanets. He stayed in Barcelona for seven years. 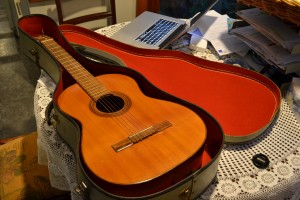 My guitar in its case

And, while there he became acquainted with Enrique Sanfeliu, a disciple of the great luthier, Enrique Garcia who convinced José that he should return to guitar making. After leaving Barcelona, José moved to Palma de Mallorca, staying there ten years. In 1974, he returned to Granada, and set up shop. Unfortunately, only two years later, he died, July 1, 1976.” [http://zavaletas-guitarras.com/content/index.cfm?action=view&ContentID=64]

Other snippets turned up, including the following from the Canadian master luthier who developed his skills in Palma de Mallorca, Michael Dunn, with an amusing personal note concerning his relationship with his son Pepe: “The two guitar makers, José Ferrer from Granada and Maestro José Orti Benieto from Valencia, were responsible for the production of the various models. Ferrer along with his son Pepe made the better guitars. They produced about 6 per month when father and son weren’t at each other’s throats.” If you click the link you’ll see that the article includes pics of José Orti and Pepe, but not José.  [http://archive.guitarsessions.com/dec04/guitar_maker.html] 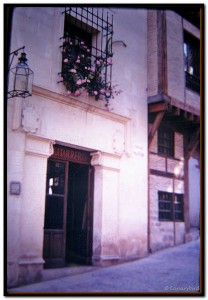 I was then lucky enough to hit on a blog Canarybird’s Nest by Sharon (surname unknown), who had lived in Palma de Mallorca back in the 1960s and knew all about the guitar factory and its owners and makers. A couple of her posts (‘The Guitar Factory‘ and ‘The Bride’s Hand‘) provide specific information and pics, including this one of the entrance to the guitar factory. Interestingly, Sharon’s outline of the personnel in the guitar factory doesn’t quite gel with the above quote. She writes, “The guitar builder from mainland Spain, José Orti, also know as el maestro, had left and been replaced by José Ferrer who was aided by two young ladies, Pepa from Andalucia and Maria, who was Mallorquin. They helped with the work as well as the polishing and finishing of the guitars.”

The apparent inconsistencies in this information at least partly melted away with the following description from a site by Antonio Morales Nogués, successor to the original owner of Los Guitarreros de Mallorca, George Bowden: apparently George “went to Valencia and hired the master José Ortí, grandson and son of guitar builders who had worked at the popular factory Telesforo Julve. Afterwards he hired the son and grandson, both called José, of the prestigious guitar builder from Granada, Eduardo Ferrer. Them and some more employees formed the base of the workshop which would export Majorcan guitars to the whole world.” So there were two Josés, father and son, though the son was referred to as Pepe. And which José made my guitar? I don’t know. 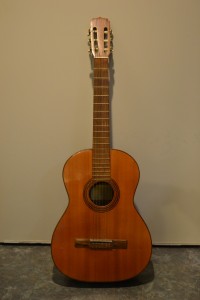 Anyway, that’s the origin of my favourite guitar. It’s not perfect – the pics don’t reveal that the body has a slight twist, meaning that the strings are rather too high with respect to the fretboard. But apart from that it’s lovely – plays easily and has a rich, full voice. The imperfection probably (certainly!) means that it’s not worth as much as the one I found for sale on the internet – apparently in mint condition, it was recently going for US$3200.

I doubt if I’ll track down Mr/Mrs Hansen, though I do muse that they toured Europe where they bought the instrument, boarded the Akaroa in London, strummed the guitar on the poop deck on the way to Australia (a pamphlet from the time reveals that the ship visited Cape Town, London, Tahiti, Queenstown and Ponto Del Garda), and then had to sell it to raise money in their new home country.

I should play it more often.

4 thoughts on “Digression: my old guitar”