I browse The Browser (despite their new subscription policy). I dally with Arts and Letters Daily. I am cheered by Open Culture. Yes, I find plenty of good reading on the internet, and this post is a snippet of some interesting stuff out there (IMHO).

First up is our old friend Nicholas Carr (of The Shallows fame) with a short article ‘Paper Versus Pixel‘ in Nautilus (well worth a browse in itself: observations on “science and its endless connections to our lives”). 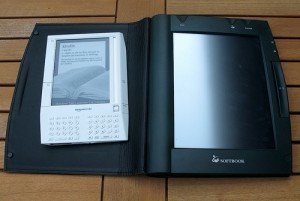 It’s a nicely balanced piece, reflecting on recent trends which reveal a pattern of co-existing technologies: “A recent survey revealed that even the biggest fans of e-books continue to purchase a lot of printed volumes.” The basic contention of the article is that “print and digital experiences are complementary”, and Carr backs this up with well-informed comment and speculation. This notion of complementarity should alert us distance educators to the care we need to take with our decisions on how to deliver our courses: what balance should there be between print-based and online materials? What are our students’ habits and preferences?

Speaking of students, the next piece is a powerful polemic on the state of higher education in the US: ‘Academy Fight Song‘, by Thomas Frank. It’s a powerful piece in The Baffler, another great overall read if you have the time. And the message from Frank is clear: higher education is “today driven by motives indistinguishable from the profit-maximizing entities traded on the New York Stock Exchange”. This has led to the profound problem that now beset universities, as “the charmingly naive American student is in fact a cash cow, and everyone has got a scheme for slicing off a porterhouse or two”. It’s grim reading (check the example of the Cooper Union art and architecture school about half way through the article), but one being repeated in various guises in many countries, my own no exception.

Not quite so grim but nevertheless negative is another Baffler article, ‘All LinkedIn with Nowhere to Go‘, by Ann Friedman. 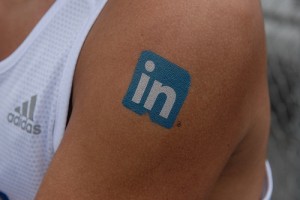 First, a confession: I’m in LinkedIn, and receive its regular messages telling me I’ve been endorsed for certain skills. But do I find it useful? In a word, no, and I guess that I’ve assumed that it’s simply because I am no longer seeking advancement in my career. So I was rather intrigued to find that I am not alone, and that LinkedIn can be described as “an Escher staircase masquerading as a career ladder”. That lovely metaphor just about sums up the entirety of the piece, but please try to find time to read it, you’ll find it enlightening and entertaining.

On a lighter note, there’s a lament to the overuse of the word ‘genius’ in Joseph Epstein’s ‘I Dream of Genius‘ in Commentary Magazine. 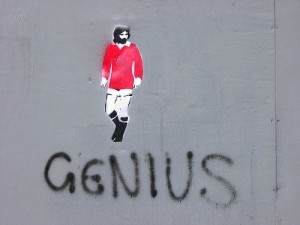 This is … was … a talented footballer, not a genius.

The piece is actually (another overused word!) a book review, but like all good reviews is also much more, with Epstein bringing his own knowledge and experience to his critique (favourable) of Darrin M. McMahon’s Divine Fury: A History of Genius. It’s all good stuff: there’s a swipe at IQ tests, including mention of a longitudinal study of “1,000 children who scored 140 or more on IQ tests (140 was thought to be potential genius level) and arranged to track them through their later lives. None did anything extraordinary, while two children tested at the same time who did not make the 140 IQ cut went on to win Nobel Prizes.” Somewhat reassuringly, Epstein concludes that genius remains “remains the least understood of all kinds of intelligence”.

2 thoughts on “Some worthy reading”