We’ve all had the experience – a long flight which is due to land early in the morning, and with 90 minutes to go they bring out the ‘breakfast’. We dutifully ask for the Western style, lift the lid, and are confronted with what is both visually and olfactorily pretty ghastly. The crispy bacon is limp and chewy, the tomato leaking everywhere, the green stuff (surely it isn’t spinach) repelling, the sausage unmentionable (whoops, I just mentioned it!) and as for the egg – it’s somehow turned into a greyish yellow mound of springy splodge. There are variations, but you know what I mean, especially if you’ve read the famous ‘best ever’ passenger complaint letter to Richard Branson. 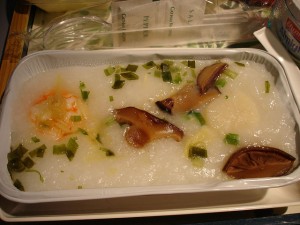 Didn’t take a pic of my congee (too busy eating it), but this is very similar (with prawns rather than chicken).

Faced with the prospect of such a platter, I’ve just sampled the alternative (at Marilyn’s strong suggestion, and despite the stewardess’s polite question ‘Have you tried it before?’). It was delectable: it was the congee. Yes, the traditional Asian dish works sensationally well on an aircraft – ours was chicken with Shitake mushrooms. If anything it was a trifle bland, but a dab of salt and pepper brought it to perfection. I’m a convert. Unless they start supplying porridge, that’s it for me for the foreseeable future.

Why am I telling you this? Partly as a travel tip, and also as an excuse to mention the wonderful week we just enjoyed in Hong Kong at Nic Robinson’s memorable 80th birthday bash (with a dash on higher education at the end). Nic is not your typical 80-year-old: he still runs his marine surveying company; last year he was seen wind surfing; …

The birthday celebrations took place over four days, starting with a memorable firing of the Noonday Gun, a leftover from Hong Kong’s colonial past (and famously mentioned in Noël Coward’s ‘Mad Dogs and Englishmen’). One of our fellow guests captured the moment in following video clip.

On it went … champagne breakfast, walk up the Peak, subsequent foot massage, celebratory dinner at the USRC, barbecue at Hebe Haven Yacht Club, … we were exhausted. 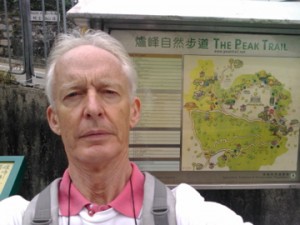 A self-taken snap as I reached the Peak, avant caffeine.

Please don’t think that these were trivial exercises. The Peak trek was all the way from the Peddar Street exit of the MTR in Central (for those who know Hong Kong) through mid-levels, visiting nominated historical sites (taking photos at 4 stops to prove we’d made it and thus qualify for the massage) and on up the trail to the top. It took hours, and I was in serious caffeine deprivation by the time we got there to suck down a coffee at Delifrance (marginally better than Starbucks).

Then into a taxi (with a delightful driver, a fellow swimmer) and down to Happy Feet, where Marilyn and I were soothed by two delightful ladies, while Pete and Bernie suffered at the hands of two dour males who caused more pain than pleasure. 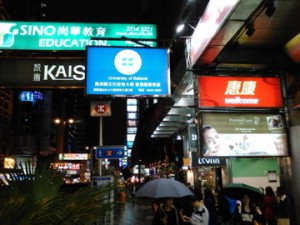 Tacky marketing of an Australian university. Click pic to see who it is!

And so it was that Chris Walsh and I were wandering down Nathan Road from Jordan to Tsim Sha Tsui on the Monday evening after another meal out when I spied the neon sign for an Australian university that you see in this photo. It immediately brought back memories of the signs that used to be regularly seen in the area back in the late 1980s and early 1990s, when Australian universities teamed up with anyone and everyone to entice Hong Kong students to enrol, as either on or off campus learners.

It was anything but an edifying spectacle at the time, inspiring a colleague (hello Roy Stall wherever you are) and I to write a conference paper titled ‘Trading Places: Australia’s marketing of education to Asia’ that was strongly critical of the dubious practices of some tertiary institutions. Our presentation included OHPs of photos similar to that shown here. Since then, thankfully, the Hong Kong Government has tightened the rules governing overseas institutions, and Australian universities have improved their marketing techniques.

But enough of my grumbles, we’ve now moved from the ridiculous to the sublime, and are nicely ensconced in Oxford for the next month. The only problem is that it’s 4:30 pm and already dark … and very cold!