It’s accepted that social media have changed the educational landscape. But is it a revolution or just a fleeting distraction? Or, more strongly, is it an angelic benefactor or the devil in disguise? Will social media serve as a panacea for the ills which plague modern education or will they destroy it? In short, are social media good or evil?

Even if overstated, the question remains valid. Social media are simply tools, so of course, are neither good nor evil. Unfortunately, discussions on the positives and negatives of social media in education quite often devolve into supporters who see the tools purely as a bright beacon of hope and detractors who view them as a waste of time and a distraction. 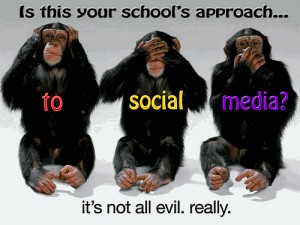 In truth, it is a bit of both. Evidence exists (of both the research-based and anecdotal variety) that says social media can keep students more engaged by incorporating them into lesson plans. Because students are already spending so much of their time on social networks, it can make schoolwork friendlier, more familiar, and more of a connected experience.

Yes, social media are good for:

Communication and collaboration. An infographic created by Onlineuniversities.com shows that schools are successfully utilizing social media as a way to distribute course materials, get students asking questions, and encourage them to work together. This is especially helpful for those students who aren’t outgoing in person, and for those who might have missed notes or a handout.

Engagement. Educhatter writes of 7th grade teacher Elizabeth Delmatoff’s social media pilot program in Portland, Oregon. After implementation, grades jumped up by more than 50%, chronic absences went down by more than 33%, and – perhaps most telling – 20% of students started doing non-mandatory assignments even though they weren’t getting any extra credit to complete them.

Different kinds of learners. Along with other positives, ZDNet points out that social media, like the web in general, are built in such a way that you can engage people who learn in a variety of different ways. Not only is it possible for a teacher to pass on knowledge using several different methods (writing, pictures, infographics, videos), there is also huge potential for interactivity (quizzes, questions, comments).

Teaching life and professional skills. A recent Kansas City Star article profiles high school students who receive a mix of traditional school and CAPS (the Center for Advanced Professional Studies). Among other activities, they learn how to create apps for real businesses and figure out solutions to energy issues in automobiles, partially through utilizing social media tools.

But social media are bad for:

Focus. Oxygen Factory conducted a study a few years ago where 80% of students aged 11 to 18 said that social networking sites like Facebook distracted them from their studies. They would go online with the intent to research something for class and end up ‘studying’ their friends’ status updates or the free games many social networks have. With the rapid increase of smartphones and tablet computers, this distraction has quickly arrived in the classroom, too.

Instilling appropriate behavior. Many experts have decried the effect that the internet seems to have for convincing people to behave in foolish ways. Students using social media in the classroom are sometimes more inclined toward cruel interactions, revealing personal information (and documentation) that they would never share in the ‘real’ world, and seeking out or displaying inappropriate content. One prime example that has received a good deal of attention is cyberbullying.

The poor. We hear that the internet can level the playing field and that the digital divide is closing, but a 2010 Kaiser Family Foundation study concluded that where social media is involved, that might not always be a good thing. They found that the entertainment elements present in social media and other digital devices tended to have a greater effect on students from low-income backgrounds, who were more distracted from work than their more-affluent peers. In short, the positive things that can be done with social media weren’t able to overcome the negative ones in this group.

Security. When students use social media sites in schools, it opens up both the students and the schools to more potential security issues. Hackers have a greater opportunity to break in, viruses are more likely to infect the system, and individuals may be more exposed to phishing expeditions and other scams. 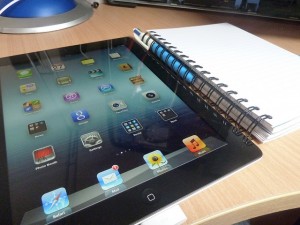 Remember, though: Most of the ‘bad’ effects happen regardless of whether schools attempt to harness social media or not. The fact that it exists and a vast number of students have access to it means that it is causing distraction in the classroom, that cyberbullying is happening, and that (shock of all shocks) a fair number of students who use it are at times behaving badly and sharing that behavior with the world.

And when schools attempt to clamp down on the use of social media and other kinds of digital technology, they often find that students’ engagement decreases and they focus their efforts on finding ways around the ban rather than attending to their schoolwork. This doesn’t mean that there aren’t things to be concerned about, but rather that the focus should be on finding ways to reduce the negative and enhance the positive. Instead of fearing what kinds of crazy things students might get up to on social networks, schools can teach appropriate behaviors and educate students on the negative impact of using the web irresponsibly.

Existing tools can make social networks in schools safer. The Onlineuniversities.com infographic mentioned earlier points out that there are sites where teachers can be given control over what their students can see and do. Any concerns about viewing or posting inappropriate material should be moot – at least on the school-controlled site. 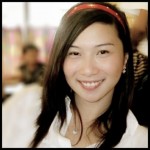 * Our welcome guest is Tess Pajaron, from Open Colleges, an Online courses provider in Australia. She regularly writes about study/work abroad experiences and education. In her spare time, Tess loves to travel.