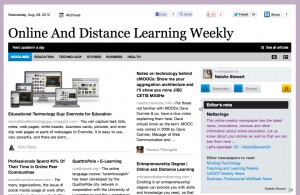 Yes, I know it’s corny, but when confronted with a nifty (or even ‘natty’) piece of work by someone named Natalie (and yes, she calls herself Natty), how could I resist the above title for this blog post?! As the title suggests, Natty has bravely created an online newspaper called Online And Distance Learning Weekly, surely a daunting task for anyone, let alone a “Grad student of business, writer, luv traveling to exotic places and meeting new people”, who also publishes Minding Psychology: A Weekly Update.

Not surprisingly it’s mostly a compilation of existing material rather than freshly written articles, but is well-structured and presented, using the paper.li online newspaper software application. The vertical structure is organised under the headings of Headlines, Videos, Education, Technology, Stories, Business and Health. And there’s some good stuff there. 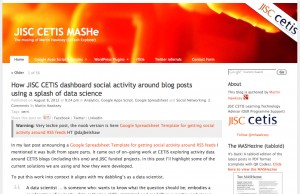 For example, the pic above shows a link to a blog post by Martin Hawksey: ‘Notes on technology behind cMOOCs: Show me your aggregation architecture and I’ll show you mine‘. I hadn’t seen Martin’s work before, and found this really helpful – nicely written,  highly informative and incorporating helpful links (including a video explanation of MOOCs).

ODL Weekly is not all perfect of course. It may be just my browser, but some of the headings run into the text, and not all articles are properly categorised – for example, in the August 15 issue, an article introducing ‘Health Study Weekly’ is listed under Stories rather than Health. But these are minor matters and I’m just being picky (you have to be in a review, don’t you?).

As for Natty herself, it seems that she sensibly lives in Australia (Sydney to be precise, so not quite in the world’s most livable city, Melbourne) and is originally from the UK. So she brings a nice international flavour to the newspaper, and seems to resist temptation to overload it with Aussie links. 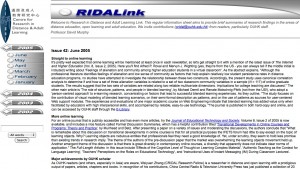 Reading ODL Weekly caused me to reflect how our online contributions have continued to evolve over the past decade. During my second 4-year stint at the Open University of Hong Kong, in 2002 I started a monthly online newsletter called RIDALink (for Research in Distance and Adult Learning Link) which was fun but quite a bit of work. After 42* issues, and then returning to Australia, I moved on to blogging, and again really enjoy it (much like others, well expressed by Martin Weller). And now there’s quite a few ODL compilation web sites as well Natalie’s, including Martin Weller’s Meta Ed Tech Journal and Jim Ellis’ e-Learning Digest.

I doubt if I’ll move on to this form of online publishing, but who knows?

The Answer to the Ultimate Question of Life, The Universe, and Everything

* Alert readers who are fans of Douglas Adams will have realised the significance of 42 and made a connection with matters cosmic. If this is a complete mystery to you, then check the Wikipedia entry on this topic. As is therein explained, “The Answer to Life, the Universe, and Everything is a concept taken from Douglas Adams‘ science fiction series The Hitchhiker’s Guide to the Galaxy. In the story, the answer to the Ultimate Question of Life, the Universe, and Everything is sought from the supercomputer Deep Thought. The answer given by Deep Thought leads the protagonists on a quest to discover the question which provides this answer.”