Never heard of Annotum? Neither had I until Martin Weller brought it to my attention through his new project, the Meta Ed Tech Journal. As Martin explains, it’s not really a journal as such, “but rather an aggregated, or meta-journal. It operates by selecting articles that have been published under open access licences (usually Creative Commons) in other, proper, open access journals. These are gathered together with a commentary, to create a new mix of a journal. We aim to publish three times a year, with special editions in the mix also.” Have a look at it, and if it excites you, contact Martin to help with a special issue or to join him as an editor (check the ‘About’ page for details). And excuse the parochialism, but it’s pleasing to see articles from the Australasian Journal of Educational Technology in the first two issues. 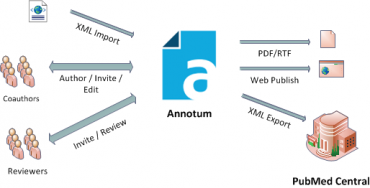 Back to Annotum – it’s the platform on which the journal is built (it’s also the replacement for Knol). Released late last year, it’s “an open-source, open-process, open-access scholarly authoring and publishing platform”. Based on (and with enhancements to) WordPress, it seems to be a nicely focussed application that enables projects such as Martin’s to go ahead with a minimum of fuss and bother (and cost!). The only (slight) irritation is the appearance of advertisements – yes, Google knew I’d been looking for cheap flights from Melbourne to London and consequently displayed an ad to that effect.

There are a number of ways in which Annotum can be used, and three are outlined by the team, including: “An online journal or university site accepts submissions via XML import or content authored on its in-house Annotum system.  The Journal can use Annotum editorial workflow features, or those of any existing system they prefer.  Approved, reviewed articles are published to the web and/or exported in XML format to a public repository such as NLM’s PubMed Central.” This concept is illustrated in the diagram.

And if you want further background and information, read the article by Carl Leubsdorf, Jr. (he’s one of the people from Solvitor LLC behind the project): Annotum: An open-source authoring and publishing platform based on WordPress.