Pinhead – that was the nickname of Richard Meredith, the Senior Master of the Middle School (later to be general secretary of the Society of Friends World Committee for Consultation). Children are cruel, aren’t they? Anyway, it was the end of first term for Class 8X, and Pinhead’s comments on my school report were I have been disappointed at the lack of self-discipline evident in behaviour and appearance this term … Despite my mother’s subsequent firm reassurance that have discussed above with David; he will improve next term, next term it was we will be happier when David is giving fully of his best, and does not allow his other interests to interfere with his work. 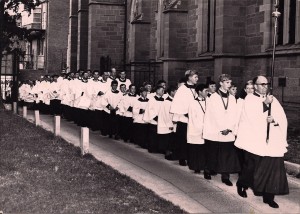 I’ll spare you the details of what the ‘other interests’ were, except that she sat near me in class. It had nothing to do with my singing in St David’s Cathedral choir, which was coming to an end as puberty kicked in and my voice broke (see needlessly added photo – only one I could find of me at the time).

I was reminded of and searched out my old (very old, 1964) report after perusing a book I picked up second-hand: “Could Do Better: School Reports of the Great and the Good” (Hurley, 2002). The title also reminded me of a purportedly true story from my early teaching days at Hobart Technical College. The legendary Head of Science, Joe Fraser, had made the comment Could do better on a particular lad’s work. His father was most unhappy, and came in to meet with Joe and to voice his indignation, claiming that his son had worked his hardest. Joe listened calmly, took the report back and added the word ‘no’ to make it Could do no better.

Anyway, here are some pithy classics from Hurley’s collection in the book. In such matters, you really should hand it to the English:

Jilly Cooper: She has set herself and extremely low standard which she has failed to maintain.

Michael Palin: I think he is just a teeny bit pleased with himself – or so I am prepared to hazard.

Peter Ustinov: He shows great originality, which must be curbed at all costs.

Judi Dench: Judi would be a very good pupil if she lived in this world.

Richard Briers: It would seem that Briers thinks he is running the school and not me. If this attitude persists one of us will have to leave.

Stephen Fry: He has glaring faults and they have certainly glared at us this term.

Sue Lawley: I do believe Susan has glue in her plimsoles. (for PE)

Beryl Bainbridge: … though her written work is the product of an obviously lively imagination, it is a pity that her spelling derives from the same source.

Robert Graves: Well, goodbye, Graves and remember that your best friend is the waste-paper basket.

Winston Churchill: Constantly late for school, losing his books and papers and various things into which I need not enter.  he is so regular in his irregularity that I really don’t know what to do. he had such good abilities but these would be ‘made useless by habitual negligence’.

David Owen: If I had to select an expedition to go to the South Pole he would be the first person I would choose. But I would make sure he was not on the return journey!

And there’s plenty more where that came from. I’m sure you could add your own example/s! 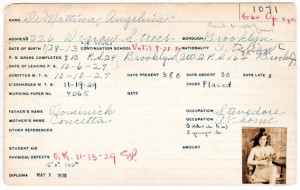 Finally, on a more serious (but nevertheless, highly engaging) note, just as I was finishing this post I came across (courtesy of Arts & Letters Daily) a fascinating series of five articles in Slate by Paul Lukas, who tells the tale of the discovery and subsequent journey concerning a set of old school reports from the Manhattan Trade School for Girls of the 1920s. The author came across the cards 15 years ago, and has spent time tracing the history of the institution and locating the families of the pupils in the cards to provide them with moving and meaningful updates of their family history. I’ll say no more … just click the link and enjoy.

2 thoughts on “Of school reports”