I’d never been to Oxford, but that personal deficiency has now been rectified. Last month’s visit to that esteemed university city was a true delight, especially as Marilyn and I could pedal around on bicycles borrowed from our daughter and son-in-law (though it did mean I had to rise early each morning to drive them to work!). It’s the preferred means of travel, especially near the centre of the city, where cars and parking are actively discouraged. 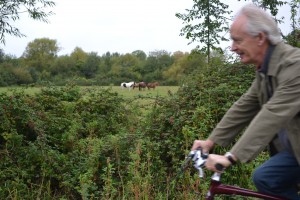 Most mornings saw us pedal along the picturesque paths through the fields and gardens for the short ride to our morning coffee, either in the crypt at the church of St Mary or at the delightful ‘Missing Bean’ cafe in Turl Street (best coffee in Oxford, and not just imho), close to one of Oxfam’s charity shops which specialises in books, many of them of some antiquity. Point to note: the quality of the coffee (and food in general) has improved remarkably in the UK in the past few years, though you do have to be careful when asking for a flat white. For a great evening meal, you can’t go past the duck at The Fishes, or the riverside idyll of Trout, or wander further afield to the Wild Thyme in Chipping Norton (home village of Jeremy Clarkson, apparently, but don’t let that put you off). 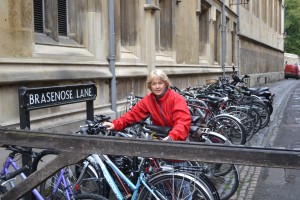 Back to books: really enjoyed browsing in Blackwell’s, a bookstore that somehow gets it right, enticing you to peruse and purchase, and not just with the ‘buy 3, pay for 2’ offer. Though I must admit to succumbing, being able to buy Howard Jacobson’s (Man Booker prize-winning) The Finkler Question, Keith Richards’ surprising Life and Edmund de Waal’s intriguing The Hare with Amber Eyes (I’d never heard of it, but the cover blurb got me in), all  for a measly seventeen pounds.

It was late in the summer season (crossing into autumn), so the city was not as crushed as at the height, but there were of course still plenty of visitors around, with the ever-present walking tours an amusing presence. I’m sorry we didn’t join one, actually, as they can apparently be exceedingly entertaining and informative if you get the right guide. 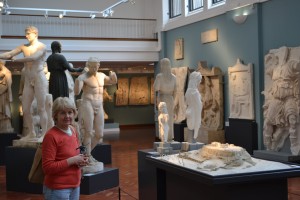 The colleges are probably the star attractions, and as a consequence (and to keep the numbers down) they charge a princely ten pounds each to enter their hallowed portals. But for me the highlight was the Ashmolean Museum, and not just because it is free and has a posh restaurant (4th floor) and excellent cafe (crypt). It’s a truly jaw-dropping collection (or, rather, collections) – to be honest, there’s still a lot of it I haven’t seen, as I couldn’t get past the Greco-Roman section. Yes, I know that some of the exhibits are plaster casts, and others were most likely stolen by English adventurers, but it’s still stunning stuff. Next in line is the excellent Museum of the History of Science (also free entry) which even includes a piece of a blackboard with part of a presentation given by Einstein in 1930.

And then there’s … I’d better stop before I get started on the nearby villages of Burford and others, with their historical buildings, antique shops and, of course, quaint tearooms.