For a change, how about a short quiz? 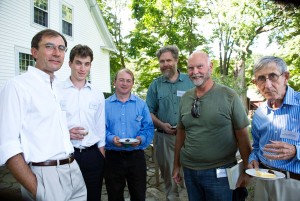 It all started whilst browsing Arts and Letters Daily and spying the name Freeman Dyson. The link took me to ‘How We Know’, a review he recently wrote of James Gleick’s The Information: A History, a Theory, a Flood. By this time I was salivating: both of these gentlemen are heroes of mine, though Dyson reigns somewhat supreme (up there with James Taylor) due to his longevity (he’s 87) and astonishing intellect. Freeman John Dyson was one of the truly great scientific minds of the 20th century, and has carried on in the 21st with some marvelous contributions. Have a look at him (on the right) mixing it with Craig Venter, George Church and others at an Edge special event (Life: What a Concept!) in 2007.

Though a somewhat lesser mortal, James Gleick is no slouch, the first time I heard of him being my encounter with the inspiring Chaos: Making a New Science. Reading that book led me to reinvest some energy back into mathematics, and resulted eventually in my use of chaos and complexity theory in my doctoral thesis (on distance education, to further confuse matters, but that’s another story).

Now I haven’t yet read Gleick’s new book, but Dyson did also allude to a recent Gleick article on the same topic in The New York Review of Books. In ‘The Information Palace’, (coincidentally posted on 8 December, my birthday), Gleick discusses the recent updating of the OED’s entry for the word ‘information’, alerting us to its monumental length and discussing it’s recent growing significance.

Anyway, that’s enough from me, read the articles yourself – especially Freeman Dyson’s.